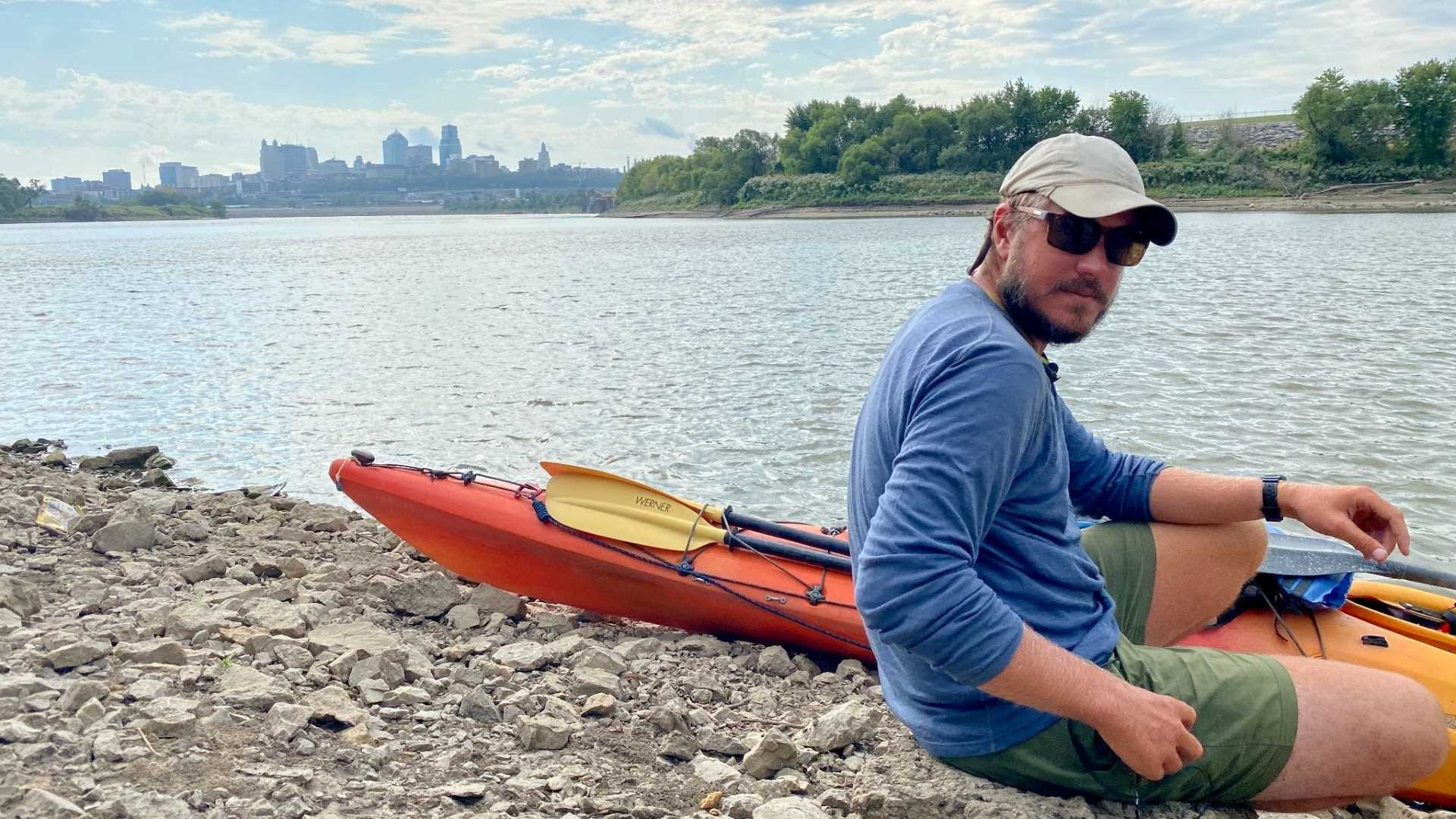 Image credit above: Long-distance kayaker Graham Jordison is paddling along the 2,341-mile Missouri River. His effort is designed to draw attention to the coal-fired power plants operating along the river. (Clarence Dennis | Flatland)

Both passion and protest, Graham Jordison paddles alone the 2,341 miles of the Missouri River with his kayak.

On Monday morning, Jordison pulled his orange boat over the rocks at Kaw Point in Kansas City, Kansas, a few hundred yards from the last stretch of the “Big Muddy” of the state of Missouri.

Jordison’s trip, which departed July 18 from Three Forks, MT, is about a week from the finish line in St. Louis, where the Missouri River empties into the Mississippi River. The long distance paddler travels at an average of 35 miles per day, more or less.

Reflecting on the possibility of storms in the area, Jordison stopped briefly to reflect on his journey on North America’s longest river and his mission. He was standing on the same shore as Lewis and Clark at the start of their 1804 expedition to explore the Louisiana Purchase.

In a way, Jordison’s journey began when he was a boy, learning to love the water on the banks of the Little Sioux River in Iowa.

Freshly moved from his birthplace in arid Arizona, Jordison’s father bought a boat.

â€œIt was my first experience with a river and I grew up loving and appreciating them, fishing and swimming in them,â€ Jordison said. â€œThen when I grew up and learned about the environmental impacts and filth of some of these rivers I’ve spent my life in, I had to do something to change that. “

Today, Jordison is an organizer of Sierra Club Beyond Coal Campaign, a local effort dedicated to replacing coal and gas with renewable energies. This summer, he took a sabbatical to embark on the 2,000-mile journey, meant to inspire communities along the river.

“I hope my trip helps make the connection between the energy choices we make and their impact on the land, air, water and people along the Missouri River and beyond,” said Jordison.

The Missouri River is not Jordison’s first long ride in the name of healing planet Earth.

And it’s been quite a journey so far.

â€œThe wind is not my friend, unless it is behind me. Waves, animals – I saw a grizzly bear the first day along the shore, â€Jordison said, referring to some of the challenges presented on his solo mission.

He was stuck in chest-deep mud, battered by huge barge wakes, and rushed to find a place to sleep in parks or on sandbars at night.

The first few weeks of Jordison’s trip were marked by a stark reminder of the “why” of the personal effort.

Even before the possibility of documenting 10 coal-fired power plants along the Missouri River route, views of distant mountain ranges and the sky above were obscured by smoke and ash. The Montana summer forest fires were a reminder of the consequences of climate change.

Jordison’s kayak continued down the river.

Based on data from Coal toll, the plants combined contribute to 328 premature deaths and the release of 50,551,915 tonnes of carbon dioxide (CO2) into the air each year. A byproduct of coal combustion, the greenhouse gas that absorbs and radiates heat is one of the main contributors to climate change.

Locally, Jordison paddled past the Kansas City Board of Public Utilities’ Nearman Coal Plant in Kansas City, Kansas, upstream of the Missouri River in the northwest. On the Missouri side, Jordison got a river view of Evergy Hawthorn Coal Plant, not far from the East Bottoms.

Data shows that people of color live within each three-mile radius at 46% and 44%, compared to state averages of 21% and 18%, respectively.

According to US Energy Information Agency, in addition to CO2, emissions from burning coal include sulfur dioxide (SO2) and nitrogen oxides (NOx), which cause acid rain and smog, and can cause respiratory illness and disease pulmonary in humans. Neurological and developmental health problems can occur from the heavy metals released during the combustion of coal.

â€œThese 10 power plants are expected to operate until 2040 and that’s not acceptable,â€ Jordison said, adding that many locals might not even be aware of the area’s plants and harmful pollutants.

“You don’t really recognize how big and massive and vast these plants are and how many there are until you are on the river in this little boat passing them.”

“Everything that touches you”

“What can we do? This is all we can. All that touches you,” said Billy Davies, conservation program coordinator for the Sierra Club Missouri chapter, who hosted Jordison in Kansas City, as well. as the representative of the Kansas Sierra Club, Ty Gorman.

The two local Sierra Club activists joined a network of environmentalists who met Jordison along his journey.

While the kayaker has set up a Fundraising Go Fund Me, hoping to raise a dollar per mile for the Sierra Club during his trip, Jordison said it’s the conversations with community members who want to learn more to protect the natural world that can have a lasting impact.

In Kansas City, Davies and Gorman paid particular attention to the development of the Climate protection and resilience plan.

A multi-pronged approach, another key objective of the Climate Protection and Resilience Plan is to develop plans to address climate change in a â€œtransparent and inclusive process of stakeholdersâ€.

It is this key goal that encourages activists like Davies and his counterpart at Sierra Club Gorman. They see Jordison’s story and his journey as a beautiful and simple stand against the consumption of energy that is harmful to the environment.

â€œThe city wants people to speak out and hear their stories,â€ Davies said.

â€œWe encourage people to express themselves, or if you want to be creative to get attention, every piece is important and that’s what got us here. “

Thank you for subscribing!

Check your inbox, you should see something from us.