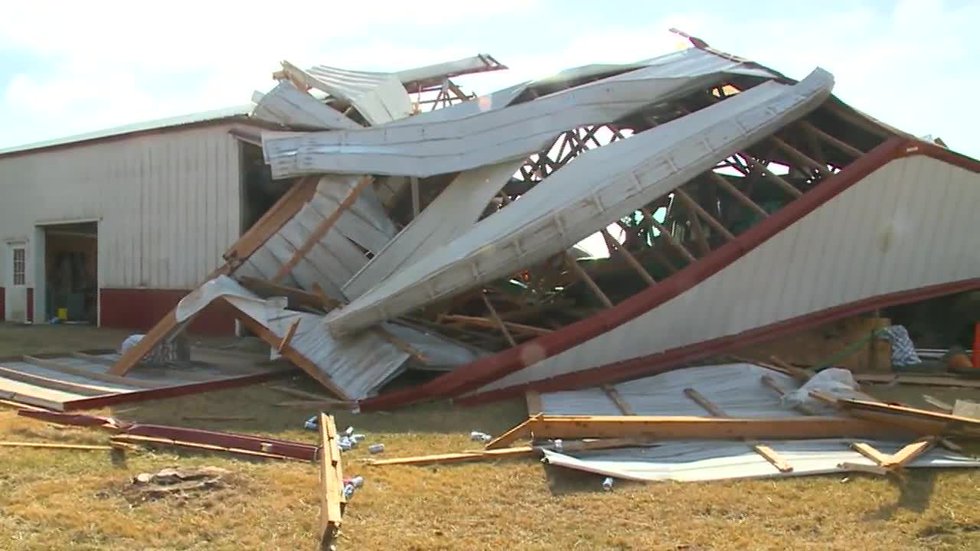 4 of 7 killed in same-family Iowa tornadoes

(AP) – Four of seven people killed in devastating storms that tore through central Iowa were members of the same family who were crammed into the pantry of a home that was flattened by a powerful tornado, authorities said.

Two children, their father and grandmother all died on Saturday when a tornado hit the grandparents’ home near the Winterset countryside which had no basement. Family members said the children’s mother, 8-year-old brother, grandfather and uncle survived the storm but were injured.

The children and their parents, from Blue Springs, Missouri, were visiting their grandmother, Melissa Bazley, 63, when the tornado struck. The storm killed Bazley, Michael Bolger, 37, and two of his three young children, Kinlee Bolger, 5, and Owen Bolger, 2.

A GoFundMe page for the family says Kuri Bolger, who is the children’s mother and Bazley’s daughter, was hospitalized after sustaining serious injuries. Lynn Larson said her daughter-in-law, Kuri Bolger, underwent leg surgery on Monday and is facing another arm operation to repair broken bones. Her eldest grandson was treated in hospital and released.

Larson said she and the rest of her family were “just devastated.”

“I just can’t describe how wonderful Mike was. Everyone loved him,” Larson said. “It tears your heart out. My grandchildren were wonderful. They were just the light of my life.

Two other people killed in the tornado – Rodney Clark, 64, and Cecilia Lloyd, 72 – lived in homes just down the street from Bazley that were also affected by the tornado. It was rated EF-4, with peak winds of 170 mph (274 km/h), the National Weather Service said Monday. The tornado was on the ground for nearly 70 miles (113 kilometers), leaving the longest path of destruction since a 1984 tornado carved out a path 117 miles (188 kilometers) long.

The seventh fatality occurred in Lucas County, about 87 miles southeast of Des Moines, when a separate tornado struck less than an hour later, injuring several other people. Officials said Monday that Jesse Theron Fisher, 40, of Chariton, Iowa, died in the storm and another area resident remained hospitalized. The state Department of Natural Resources said Fisher was in an RV at a Red Haw State Park campground near Chariton when the storm hit.

The storms that rocked Iowa on Saturday were the deadliest to hit the state since May 2008, when a tornado destroyed nearly 300 homes and killed nine people in the town of Parkersburg, in northern Iowa. Another tornado a month later killed four boys at the Little Sioux Boy Scout Ranch in western Iowa.

The tornadoes were followed by winter storms overnight Sunday through Monday that dropped about 5 inches (12.7 centimeters) of snow in central Iowa and 6.5 inches (16.5 centimeters) in Mount Vernon in eastern Iowa.

The snow prompted officials to cancel storm cleanup efforts planned for Monday after hundreds of volunteers helped out on Sunday. Cleanup was due to resume on Tuesday, but more snow is forecast for Thursday, which could cause further delays.

Elsewhere, the National Weather Service said storms generated an EF-1 tornado in southeastern Wisconsin near Stoughton with winds of up to 80 mph. The storm flattened trees, snapped utility poles and blew out windows in homes. No injuries were reported.

Hundreds of Iowans are helping clean up after a tornado ripped through Iowa on Saturday. (Source: KCCI/CNN)

The spelling of Kinlee Bolger’s first name has been corrected.