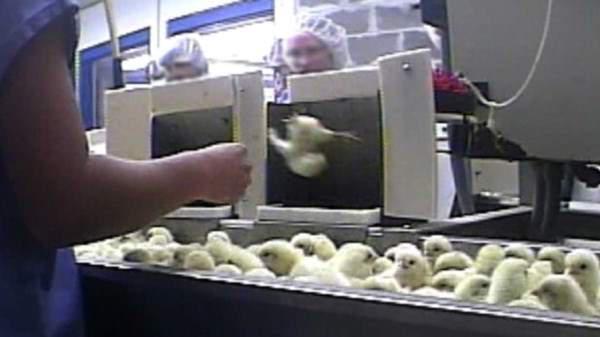 This file photo provided on September 1, 2009 by Mercy for Animals, shows a screenshot from a video (taken by an undercover member of the group) of male chicks thrown into a chipper at an Iowa hatchery. Irritated by repeated broadcasts of covertly filmed videos purporting to show abuse of farm animals, the Iowa agriculture industry has passed legislation that would make it illegal for animal rights activists to produce and distribute such images. (Photo from Mercy for Animals via AP)

DES MOINES – An animal rights and public interest group filed a lawsuit Tuesday against Iowa’s latest law designed to criminalize investigations into the treatment of animals on breeding farms.

The lawsuit, filed in federal court, alleges violations of First Amendment free speech rights. He asks the court to declare the law unconstitutional and to issue an order preventing officials from applying it.

This is the third attempt by Republican lawmakers in Iowa to ban farm surveys. The law signed by Governor Kim Reynolds in June makes trespassing in a food operation an aggravated offense punishable by two years in prison and a fine of $ 8,540. A second offense is a felony that can result in up to five years behind bars. These are far more severe penalties than trespassing elsewhere, a simple misdemeanor punishable by 30 days in jail and a fine of $ 855.

Lawmakers have said they have increased penalties for trespassing on livestock farms to protect farmers from harassment and deter trespassers that threaten the safety of the state‘s multibillion-dollar agriculture industry.

In 2019, two people from Direct Action Everywhere, a group from Berkeley, Calif., Walked into a pig farm owned by Republican State Senator Ken Rozenboom, whose family operates a farm near Oskaloosa. A video posted by the animal rights group appears to show pigs suffering in overcrowded conditions. However, the Iowa Department of Agriculture inspected the site in 2020 and said it found no signs of neglect.

An Iowa law against such animal rights investigations passed in 2012 was declared unconstitutional by a federal judge in 2019. The state appealed the ruling and a ruling was released on Tuesday, the same day that the new complaint has been filed.

In the ruling, the 8th U.S. Court of Appeals upheld part of the judge’s dismissal and continued to block the provision in the law that criminalized making false reporting by seeking employment at an animal production facility. The court, however, overturned the judge on a second provision and said the state can make it illegal for someone to gain access to an agricultural production facility under false pretenses.

An attorney for the American Civil Liberties Union of Iowa, who represented some of the plaintiffs in this case, said the group was considering appeal options.

A second law was passed in 2019 shortly after the judge’s ruling in the previous trial, and the animal rights coalition sued the new law – leading a judge to ban officials from enforcing it while the trial continues.

“By passing another unconstitutional Ag-Gag law, the Iowa State Legislature has fully displayed its willingness to trample on the Constitution in an effort to hide from the public what really happens on factory farms,” â€‹â€‹said Tyler Lobdell, Staff Lawyer for Food. & Water Watch, one of the groups that filed the latest legal challenge.

Other groups include the Animal Legal Defense Fund, the Citizens of Iowa for Community Improvement, the Benji Bailout, and the People for the Ethical Treatment of Animals.

These county officials were appointed because these are counties with animal husbandry facilities that the groups could review, but “will not send investigators because they fear investigators may be charged” under of the new law.

Iowa House Democratic Leader Jennifer Konfrst said it was one of many examples of laws the Republican majority had passed recently, knowing they would be challenged.

“It is a waste of taxpayers’ money to keep passing laws that they know will go to court and possibly lose,” she said.

The court challenge is the coalition’s ninth lawsuit in various states to challenge so-called ag-gag laws. The lawsuits have successfully overturned laws in North Carolina, Kansas, Idaho, Utah and Wyoming. North Carolina and Kansas have appealed and decisions are pending.

A federal appeals court revived a court challenge to a similar Arkansas law on Monday. A three-judge panel of the St. Louis-based 8th U.S. Court of Appeals overturned a lower court decision to dismiss this lawsuit filed in 2019 by the Animal Legal Defense Fund and d other animal rights organizations. Last year, a federal judge said the groups had not shown that they had suffered actual harm as a result of the law.