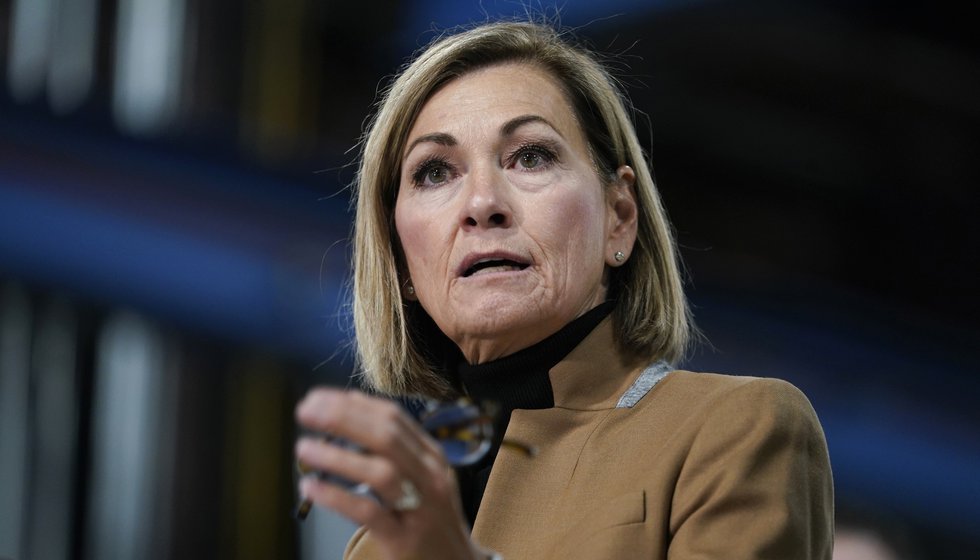 WASHINGTON (AP) — Iowa Governor Kim Reynolds will deliver the Republican response to President Joe Biden’s State of the Union address on March 1, GOP congressional leaders announced Tuesday as they were looking outside of Washington to appeal to voters in a midterm election year.

Reynolds is the first woman to be elected governor of Iowa. She was also the first governor in the nation to require schools to open for full-time in-person learning.

The GOP is keen to portray GOP-led states as doing a better job of navigating the pandemic than the federal government, where Democrats control the levers of power. Senate Republican Leader Mitch McConnell praised Reynolds for fighting COVID-19 “without forgetting common sense.”

“The president and his team should be taking notes,” McConnell, R-Ky., said in a statement.

Reynolds has pushed back on mask and vaccine mandates amid the coronavirus pandemic. She was chastised by the Trump administration’s White House coronavirus task force for ending mask mandates as Iowa saw a rapid rise in cases and deaths. Defying science, Reynolds sometimes spoke with skepticism about the effectiveness of masks in stopping the spread of the virus.

Republican lawmakers have chafed at requirements designed to prevent the spread of COVID-19, such as government mandates that certain workers receive a vaccine, saying the executive orders violate individual American civil liberties.

Many Americans have grown weary of pandemic restrictions, and states across the country are easing restrictions as cases begin to drop and a large majority of people get vaccinated. This is also true at the United States Capitol, where some GOP lawmakers have faced fines for refusing to wear a mask in the House chamber.

But the scene on Capitol Hill will be one that will starkly remind Americans that the pandemic has not gone away. Increased protections are taken to protect the health of the president and those present.

Those present at the State of the Union address should be tested for COVID-19, avoid physical contact with others, and wear a KN95 or N95 mask that completely covers the nose and mouth.

These precautions are being taken even as the District of Columbia’s indoor mask requirement for most indoor gatherings and businesses is due to be lifted the same day as Biden’s address.

House Minority Leader Kevin McCarthy said “disastrous decision-making in Washington” has been matched by real leadership in states across the country, citing Iowa as an example.

Reynolds was elected in the narrowest victory in modern Iowa politics in 2018, beating Democrat Fred Hubbell by three percentage points, 50.4% to 47.4%.

She governed as a conservative supporting a ban on same-sex marriage. She was a staunch supporter of President Donald Trump, appearing at rallies in Iowa, and said on a recent Iowa Public Television broadcast that she expected him to endorse her. when she officially announces re-election plans.

Get Easy Tribal Loans for Bad Credit at Heart