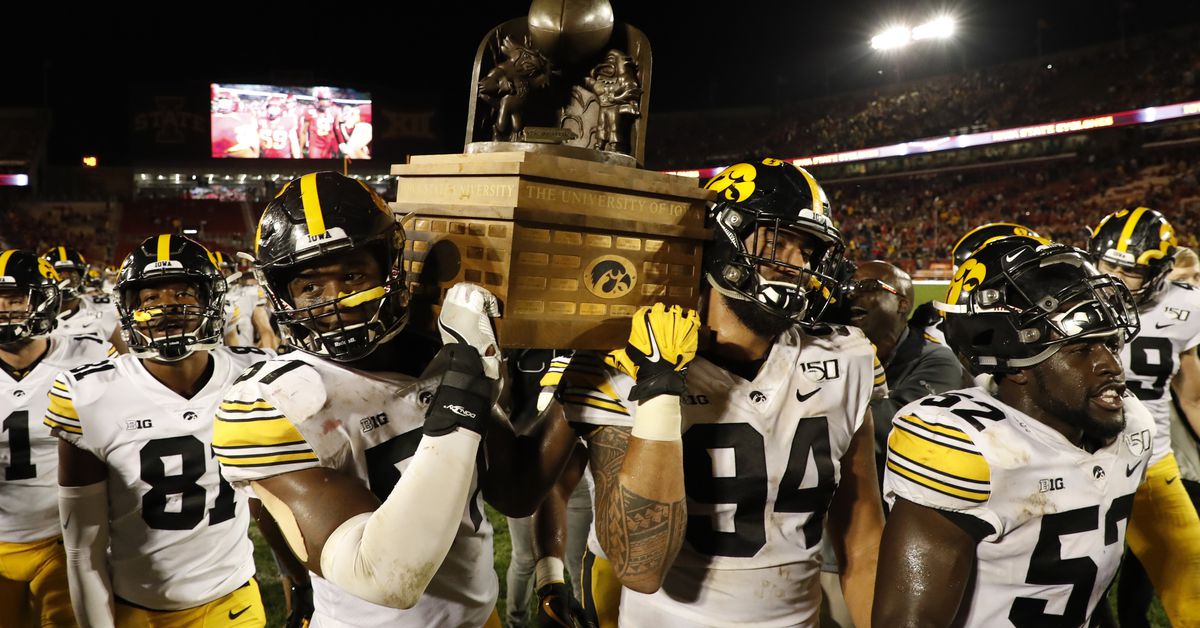 One can only assume that the Cyclones would have had a good chance of ending a five-game losing streak against Iowa had the teams played their annual rivalry game for the 44th consecutive year. Instead, the Big Ten’s conference schedule during a pandemic season left Little Brother in Ames wondering what could have been.

Well the answer is upon us. ESPN’s ‘College GameDay’ team will be outside Jack Trice Stadium for No. 10 Iowa (+ 4Â½) to No. 9 Iowa State (3:30 p.m., Ch. 7). Inside, hungry and emotional tall dudes will bang their bellies and trade helmet paint with the in-game Cy-Hawk Trophy.

“Everyone will be talking about the state of Iowa,” said Hawkeyes coach Kirk Ferentz, “so that’s a good thing.”

It will be tight, little marked and, given the great openness of university offenses, a delight for the elders. That Iowa running back Tyler Goodson was correct in calling this state of Iowa’s “Super Bowl” – disrespectful? – the Hawkeyes will have their hands full.

Both tusks are sturdy. Remember the names of the tight ends of Cyclones Charlie Kolar and Chase Allen – 6-6, 260 and 6-7, 250, respectively, and designed for the NFL. Add a four-year-old mobile starter in quarterback Brock Purdy and an all-star backer in Breece Hall, and the Cyclones have the advantage offensively. Series ended, 23-17.

The last time the teams played, seven seasons ago, the Buckeyes dismantled the Ducks in the first game for the college football playoff title. The Ducks haven’t been the same since, but they’re back and have a monster in defensive end Kayvon Thibodeaux, who can pick up any game at any time. Except, maybe, for this game right now. Think of Thibodeaux as a West Coast version of Chase Young – one of the greatest Buckeyes to ever do this – but he has a sprained ankle and will likely be limited if he plays.

Yet Oregon’s recruiting has been extinct in recent years. On both sides of the ball, the Ducks can run like no Ohio State team will in the Big Ten.

â€œWe have to understand this won’t just happen in the first five minutes of the game,â€ Buckeyes coach Ryan Day said. “We’re in a battle here for 60 minutes.”

Illinois (+10) to Virginia (10:00 AM, ACC, 890-AM): Is this the right game or the wrong game for the Illini right now? This is certainly an opportunity for Bret Bielema’s side to show what they are capable of after a win over Nebraska followed by a loss to UTSA, but non-conference road games have long been experiences. brutal for the Illini. A battle against a mediocre ACC team? It’s not that scary. Cavs in a tight.

State of Indiana (+ 26Â½) in the northwest (11am, BTN, 720-AM): Larry Bird doesn’t come out of this tunnel for the Sycamores. (Look, pretend he’s also good at football.) It’s a total shift, but that’s exactly what Pat Fitzgerald’s defense needs after Michigan State is shredded in the opener. in Evanston. Wild cats, 34-10.

Washington (+ 6Â½) in Michigan (7pm, Ch. 7): Everything makes more sense when you have a quarterback, and the Wolverines just might have this guy at Cade McNamara. The Huskies come off a humiliating 13-7 loss to Montana, but they have more juice defensively than most Big Ten teams. Go blue, 23-13.

My favorite outsider: Connecticut (+35) vs. Purdue (2 p.m., CBSSN): The Huskies have already fired their coach. They are unbelievably terrible. Still, it’s our job to take an underdog with five home touchdowns.