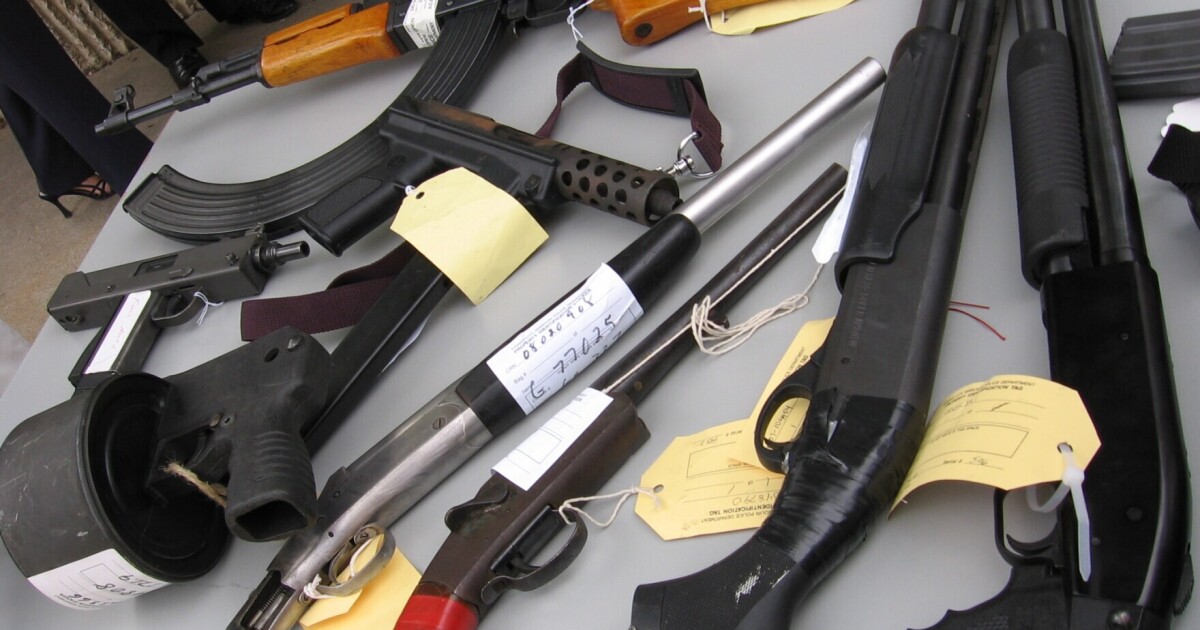 A bill under consideration by the Iowa Legislature that would penalize local police for enforcing federal gun laws has the backing of a Second Amendment absolutist who thinks the NRA is being too soft on gun rights.

Aaron Dorr, a lobbyist for Iowa gun owners, visited Iowa State Rep. Jeff Shipley, a Van Buren County Republican, as he demanded the passage of the Iowa Second Amendment Preservation Act (SAPA). SAPA would expose local law enforcement to fines of up to $50,000 for enforcing federal gun regulations in Iowa.

Dorr and his brothers are known for their strident and adamant advocacy for unfettered access to firearms.

The brothers have built a social media empire based on Second Amendment rights and are known to attack Republicans who don’t support the gun laws they advocate.

The Dorr brothers were featured in a Pulitzer Prize-winning NPR podcast in 2021, exploring the brother’s mission to “rebuild America” ​​using guns and Facebook. Dorr did not respond to a request for comment on this story.

In one of his many videos supporting SAPA, Dorr said the law was needed to protect gun owners in case the Biden administration tries to enact federal gun control laws, making echoes the rationale offered by the sponsor of the Iowa bill.

“What we’re trying to do now with SAPA is perhaps the most significant gun bill in the history of Iowa politics,” Dorr said in a Facebook video to his more than 300,000 subscribers. “We know it’s going to be a major fight because we did it last session in Missouri.”

Missouri adopted its own version of SAPA in 2021, which drew criticism for making it difficult to share resources between federal and local police in gun crime cases.

Indeed, the Iowa and Missouri bills allow anyone to sue a local police department if they believe their gun rights have been violated and collect up to $50,000 if their case is compelling. The result is that local, state, and federal law enforcement agencies in Missouri are reluctant to work with each other due to the potential legal liability involved.

Iowa State Senator Zach Nunn, a Bondurant Republican, introduced the legislation. Nunn is seeking a Republican nomination for Iowa’s 3rd congressional district, which covers the southwestern part of the state, including Des Moines. He said his bill would protect Iowans from the excesses of the federal government if the Biden administration decides to regulate guns.

He said recent “federal overruns,” like vaccination mandates and deportation moratoriums, are the reason he introduced the bill, as he fears similar federal decisions will be made on rights. of the Second Amendment in the near future.

In April, Biden issued an executive order that placed restrictions on gun modifications, banned the sale of handmade gun kits, and directed the Bureau of Alcohol, Tobacco, Firearms and explosives (ATF) and the Department of Justice to begin annual studies on firearms trafficking.

“What we don’t want is for any city or county to go ahead and knowingly or directly ask law enforcement to work on a federal case that either violates Iowa law, be the Second Amendment,” Nunn said.

However, in Missouri, local and federal police say the state’s SAPA law makes it harder to crack down on gun violence and solve violent crimes.

Blue Springs Police Chief Bob Muenz, president of the Missouri Police Chiefs Association, said police are frustrated with the lack of clarity in the law. He said the police didn’t know what they could and couldn’t do with federal agencies.

This causes the Missouri police to end their partnerships with federal law enforcement, lest collaborations lead their services to court.

“It opens up law enforcement and the municipality to possible prosecution,” Muenz said.

“No department – no police chief – wants to be a test case for a trial, or a Supreme Court case or a challenge to legislation.”

Through a Friend of the Court Record, the Missouri Police Chiefs Association and the St. Louis Area Police Chiefs Organization are supporting a lawsuit filed by the city of Arnold, a town outside of St. Louis, earlier this month to clarify the wording of the law. .

In a separate case, the counties of St. Louis and Jackson sued the state in hopes of blocking the law. Cole County Circuit Judge Daniel Green denied the request, a decision Missouri Attorney General Eric Schmitt hailed as a “significant victory” over the Justice Department under the Biden administration.

The Missouri Supreme Court will hear an appeal of the lawsuit against the law in February.

In an affidavit submitted in support of this lawsuit, Frederic Winston, chief of the ATF’s Kansas City field division, wrote that the law hampers collaborative partnerships in a state where “violent crimes are a major problem”.

He said a dozen state officers had stopped working with ATF task forces because of the law, making crimes harder to solve through collaborations with law enforcement. local order.

“ATF has seen impacts that I believe impede collaborative partnerships and the sharing of investigative information that protect the people of Missouri,” Winston’s affidavit reads. “The SAPA also impacted the ATF’s ability to rely on state and local partners to obtain information unrelated to the ATF’s own investigations, including those related to the use, the criminal possession and trafficking of firearms.”

According to court documents, the Missouri State Highway Patrol severed its ties with the ATF because of SAPA, suspending its participation in all joint state-federal task forces and halting sharing of certain data that the federal government uses to solve crimes.

In August, Poplar Bluff Police Chief Danny Whitely told CBS 60 Minutes that he was no longer working with federal prosecutors on gun cases because of SAPA. He said last year he did not press charges against a man who shot his ex-girlfriend because of the possibility of legal action.

Anti-domestic violence groups have their own concerns about SAPA’s language.

In a brief filed by the Missouri Coalition Against Domestic and Sexual Violence (MOCADSV), the organization criticized a portion of SAPA that the group says obstructs law enforcement protection of victims of domestic violence.

Muenz said departments have stopped confiscating weapons in domestic violence situations because of SAPA. He said this is another example where law enforcement fears of lawsuits from SAPA are preventing the police from doing their job.

Dorr’s Iowa Gun Owners is one of three supporters of the law. Currently, there are 10 lobbying organizations against the passage of the law and six that are undecided. Among the supporters are Bill Gustoff, treasurer of the Iowa Republican Party and the Iowa Minutemen Civil Defense Corps, a group that has supported anti-immigration and gun legislation in the past.

“It’s a bit of, maybe, a placeholder for the issue,” Rogers told Iowa Public Radio. “And we would be very happy to work with the sponsor and others… to perfect it. But we think it’s a very important issue that the state makes these statements, somewhat symbolic, but also something to fall back on if rushed.

SAPA’s opponents include groups like the Iowa Coalition Against Domestic Violence, Iowans for Gun Safety, the Iowa Conference of United Methodist Churches, and the Episcopal Diocese of Iowa.

Nunn said he is currently making changes to the law based on feedback received at the Judiciary Subcommittee, where the bill passed 2-1. Senators Jeff Reichmann of Montrose and Tom Shipley of Nodaway, both Republicans, voted in favor of the bill. Sen. Tony Bisignano, a Democrat from Des Moines, voted against the bill.

Why lines of credit are better than payday loans