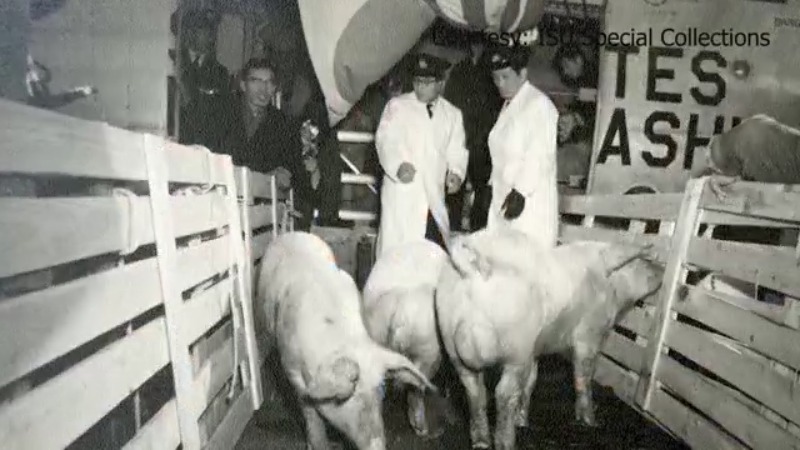 TOKYO – The Olympics allow countries to put aside their grievances and prove that we are more alike than different.

Over half a century ago, with feelings still mixed between Japan and America, a group of farmers from Iowa brought relief filled with the Olympic spirit that is still felt today. hui.

Iowa State Historical Society curator Leo Landis said decades ago a helping hand from American farmers reclaimed Japan during a time of need, “One of the most wonderful stories of friendship between the Iowians and the Japanese “.

In 1959, two typhoons wiped out agriculture in Yamanashi Prefecture. Sergeant Major Richard Thomas, an Iowan Air Force officer stationed in Tokyo, and farmers in Iowa stepped up their efforts by loading pigs onto a plane in 1960.

Landis says, “Thirty-eight young females and eight boars and so he was equipped to contain these pigs with aluminum pens inside.”

It might sound far fetched, but this time the pigs flew, making a statement heard around the world.

â€œThe type of world we live in was going to be helped if we could be friendly with other nations and that was an essential part of living in a global world,â€ says Landis.

The move was controversial as American and Japanese relations were still strained after World War II. â€œThe fact that the two nations were at war with each other just 15 years ago affected both nations,â€ Landis said.

The impact continues to be felt today. The majority of pigs raised in Japan can trace their DNA to the same pigs raised in Iowa that made the trip to Japan 60 years ago.

Landis says, â€œLook at this, we have the base of Japanese pork production that comes from Iowa. The leading pork producer in the United States.

The Iowa Hog Lift has proven that despite our differences, there can be understanding and compassion.

Japan will hold its first Olympic Games and the first in an Asian country in 1964.