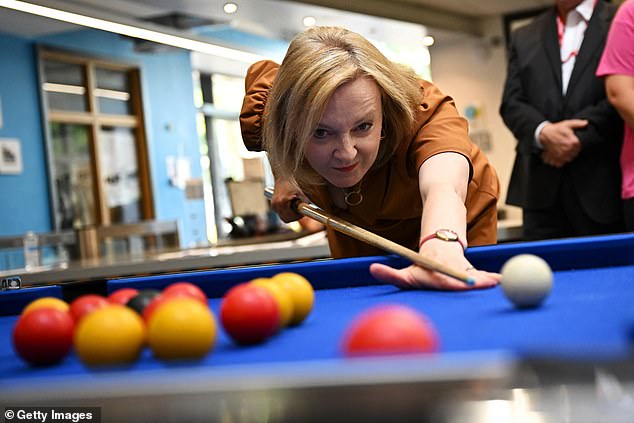 Give us a break! Key Rishi Sunak backer says Liz Truss’ tax plans are ‘suicide’ in war on cost of living… as she accuses her management rival of acting like a Labor candidate who will lead the Great Britain in recession

By John Stevens Deputy Political Editor of the Daily Mail

Dominic Raab, the Deputy Prime Minister, dramatically escalated the war of words between the two camps with an explosion of Miss Truss’ plans for emergency tax cuts in September.

He said his strategy to deal with inflation and the cost of living crisis risked plunging the Tories into “helpless opposition oblivion”.

But the Miss Truss campaign hit back, saying Mr Sunak appeared to be operating on a ‘Labour economic ticket’ that would drive Britain into recession.

A campaign source said: ‘The suicide note here is about Rishi’s high taxes and failed economic policies which he peddled over the past two and a half years when he was Chancellor.’

“He is running this campaign on a Labor economic ticket. This is not what the country needs or what Conservative MPs want. Rishi is the Pied Piper leading us into a recession with New Labor economic policies. Liz has a really conservative plan to grow our economy and put more money in people’s pockets.

He said if he became Prime Minister he would extend the support scheme he announced earlier this year, which gave each household £400 off their energy bills, while those on benefits means-tested received an additional £650.

“People need proven methods that will get them results fast. I will therefore use the framework I have created to provide additional support and give millions of people the peace of mind they desperately need ahead of winter,” the former Chancellor said.

Mr Sunak said: “In order to keep any one-time borrowing to an absolute minimum, I will first seek efficiency savings in Whitehall to provide direct support to families to help them cope without precedent we face.” But a Truss campaign source said Mr Sunak had ‘changed his stance on the cost of living two or three times in the space of a few weeks’.

“Three weeks ago he said more borrowing was irresponsible and inflationary.

“Has he changed his mind? It’s a gigantic strategic U-turn.

Miss Truss last night received another boost as a poll suggested only she could beat Sir Keir Starmer. When asked who would be better off as prime minister, the Redfield and Wilton survey found 38 per cent said Miss Truss, compared to 35 per cent for Sir Keir. Mr Sunak obtained 34%, against 40% for the Labor leader.

It came as Downing Street rejected an appeal from former Prime Minister Gordon Brown asking Boris Johnson to call a meeting of the Cobra emergency committee to deal with the cost of living crisis.

The Prime Minister’s spokesman said Mr Johnson would speak to Chancellor Nadhim Zahawi to ensure the support measures due to come into force later in the year were on track. But the spokesman said further action would be up to the next prime minister.

How YOU can interview the leadership favorite

Daily Mail readers will have the chance to ask Liz Truss their own questions in a TV interview tomorrow.

The Tory leadership favorite will set out her vision for Britain in the People’s Forum on the GB News television channel.

In the hour-long programme, hosted by Alastair Stewart and screened at 5pm, Miss Truss will answer questions from a live audience in Leigh, Greater Manchester, as well as viewers at home.

Rishi Sunak is expected to be interviewed at a later date. Miss Truss said: “I look forward to talking to GB News viewers and our members at the heart of our red wall and answering their questions.”

GB News editorial director Mick Booker said: “The idea is to bring out each candidate’s thinking on the issues closest to the hearts of our viewers and listeners.”

You can watch GB News on Freeview channel 236, Sky channel 515, Virgin Media channel 626 and Freesat channel 216, or listen to it on DAB+ Radio.

Please indicate that you are a Daily Mail reader if submitting a question.

READERS CAN SUBMIT QUESTIONS BY EMAIL TO: [email protected]