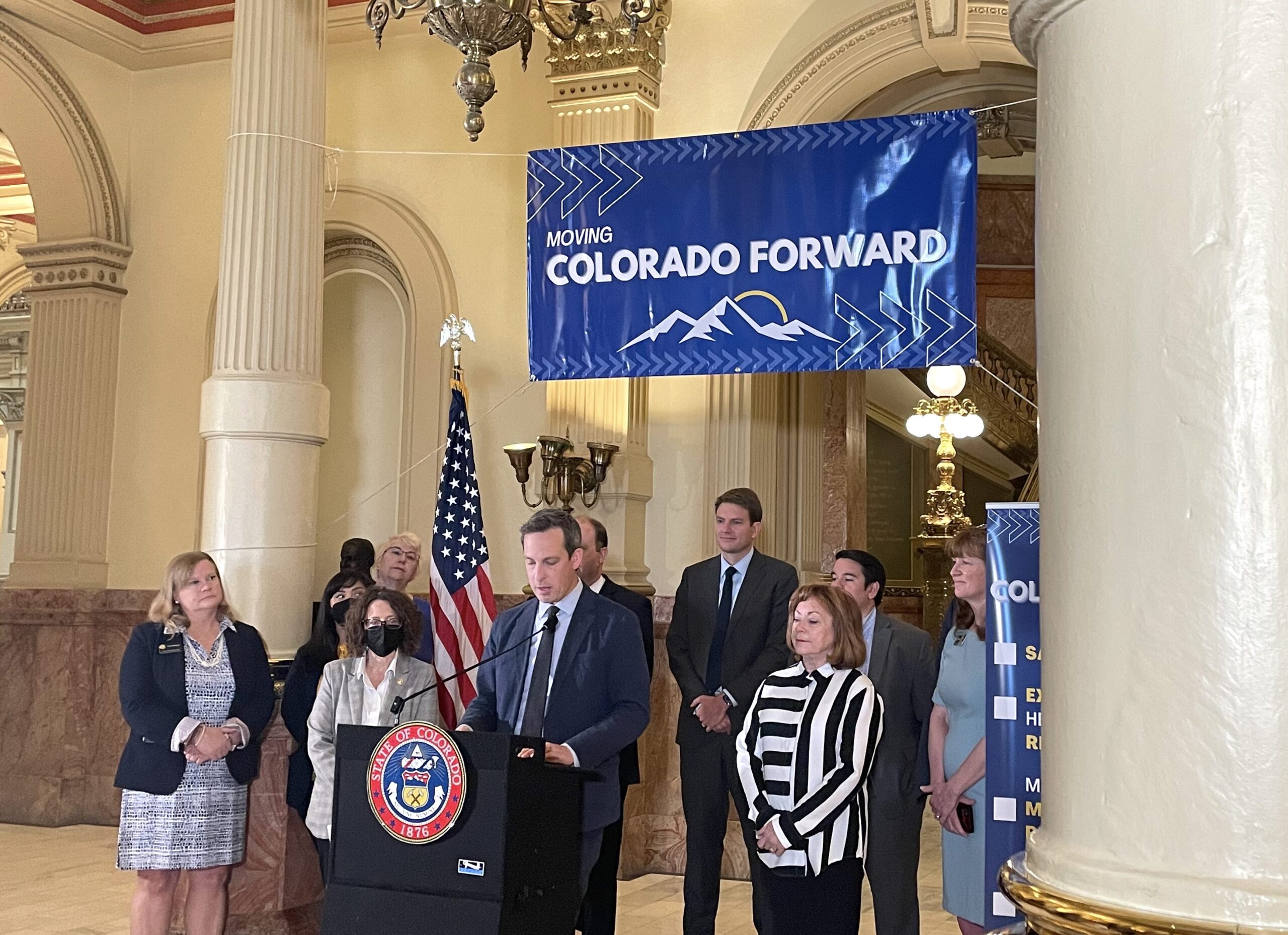 Gathered under a banner shouting the phrase ‘Moving Colorado Forward,’ Governor Jared Polis and the Democrats in the legislative leadership hailed what they described as groundbreaking achievements for Colorado families in the session that ended just before midnight Wednesday. The bills they passed would put more money in the pockets of households and businesses, they said, at a time when record inflation is driving up the costs of basic necessities.

“It’s no secret that one of the biggest goals of Coloradans and mine was to save people money,” Polis said during a Thursday morning news conference on the first floor of the Colorado Capitol building. Governor listed bills passed this session to temporarily reduce property taxes, send Colorado taxpayers prepayment checks of $400 or more, reduce vehicle registration fees and implement free preschool and universal in 2023.

Get morning headlines delivered to your inbox

In the House gallery half an hour later — at a subsequent press conference held by the House Republican minority caucus — perspectives differed on the true savings of the session for Coloradans.

GOP officials said they would have liked to provide more savings to businesses facing the pandemic and less regulation of the energy industry, which they said would drive up costs. Democratic-led policies to regulate toxic air pollution and reduce greenhouse gas emissions from buildings passed in the final days of the session despite strong GOP opposition.

For months, Republicans and Democrats in the state legislature have said they want to pass legislation that would save Coloradians money. Though they often disagree on other policies, one bill brought together the party leaders: House Speaker Alec Garnett, a Democrat from Denver, and House Minority Leader Hugh McKean, a Republican from Loveland, both praised the bill to temporarily reduce property taxes over the next two years.

“My No. 1 priority this session (was) to lower the cost of living in Colorado and make life more affordable, to help put money in the pockets of families in our state,” said Garnett at the Democrats’ press conference. “And I can say without hesitation and without a doubt that that is what we did.”

Senate Bill 22-238, which passed the House unanimously on Friday, would temporarily reduce residential and commercial property tax rates, delivering $700 million in savings over two years to homeowners and tenants. Colorado businesses, about $200 million of which would come out of prepayments that the state is constitutionally required to refund to taxpayers in years it sees big increases in revenue. The average owner of a $500,000 home will save $274 on their property tax bill next year.

The bill represented a compromise between state lawmakers, the Polis administration and Colorado Concern, a group of business leaders who had worked to place a measure on the ballot asking voters to cap the increase of the assessed value of a property at 3%. The measure could have cost local governments and school districts $1.3 billion, according to a state tax analysis. Colorado Concern withdrew its proposed ballot measure after the passage of SB-238, which includes money to partially offset lost local government revenue.

McKean described property tax legislation as one of the ways his caucus’ priorities have appeared in bills passed this session.

“Property taxes for Coloradans are going to be reduced,” McKean said. “It’s a big problem.”

But Rep. Colin Larson, a Republican from Littleton, and some of his colleagues questioned the sincerity of the ‘save people money’ slogan when it was repeated by Democrats throughout the session. . The property tax relief should have been much greater, he said, and should not have taken money away from future tax refunds.

Larson and other Republicans also wanted to see more money put back into the state’s unemployment insurance trust fund, which was depleted when unemployment rates soared during the pandemic. As a result, Colorado has a $1 billion unemployment insurance debt to the federal government. The bill that lawmakers eventually passed to address the issue provided $600 million to restore the UITF to solvency. That was enough to appease business groups, but it wasn’t enough to remove surcharges for employers who are required to help pay down the debt.

“If we were actually talking about real tax responsibility, real money savings for people and money savings for small businesses, we would have invested enough money in (UITF) to avoid the surcharge itself and to get us back to solvency,” Larson says. “Instead, we got a $600 million refund, which…isn’t nothing, but it’s not as much as it should have been, especially in a year where we had as much money as we had.”

The stalling tactics of House Republicans in the final hours of the session, when hundreds of bills still remained on the table, gave the minority caucus much more leverage to pass its own priority bills and amendments. . Deputy Minority Leader Tim Geitner, a Falcon Republican, mentioned a last-minute change the GOP was able to make to Senate Bill 22-230, politically charged legislation allowing county employees to engage in collective negotiations.

“We were able to get the things we were hoping to attach to this bill attached to this bill,” Geitner said. “It was A, starting with a timeline, because there really was no timeline.”

A last-minute amendment stipulates that a board of county commissioners would have more time to fund the terms of a collective agreement. In any given year after SB-230 takes effect, the amendment clarifies that a county finalizing its budget in December would not be required to fund a contract with an employee union that year. – unless the agreement was reached before October 15 and the union had been certified before June 1.

Republicans also won an amendment to exempt counties with populations under 7,500. The cost of collective bargaining rights, Geitner said, would be “a burden they simply cannot afford.”

SB-230, one of the session’s most anticipated bills, was originally envisioned as a way to grant a much wider range of public employees the right to unionize. But Senate Majority Leader Steve Fenberg, the bill’s primary sponsor, still touted the legislation as a victory for “tens of thousands of county workers” on Thursday.

“We stood up for Colorado workers and invested in the people who make our economy work,” he said.

Polis defended the law that laid the groundwork for universal preschool education in Colorado, which he signed on April 25 while saying it would save families money. Under Bill 22-1295, the free preschool program funded by voter-approved taxes on tobacco and nicotine products will begin in the fall of 2023.

The state’s new Department of Early Childhood will select a local organization to coordinate early education in each community, help families apply for programs, and recruit preschools into the provider network. All Colorado children will be entitled to 10 hours of preschool instruction per week at no cost to their parents the year before they enter kindergarten.

HB22-1295 passed by a vote of 24 to 11 in the Senate and 43 to 19 in the House, mostly along party lines in both houses. In the House, Larson, Mary Bradfield of Colorado Springs and Dan Woog of Erie were the only Republicans to vote “yes”. Senators Dennis Hisey of Colorado Springs, Kevin Priola of Henderson, Cleave Simpson of Alamosa and Rob Woodward were the four GOP members who supported the bill in the Senate.

Meanwhile, a bipartisan group of Senate Appropriations Committee lawmakers on Tuesday killed a bill to ban flavored nicotine products statewide. Bill 22-1064 would have cost the state more than $46 million as of July 1, 2025 — much of that tax revenue tied to the universal preschool program, a key campaign promise for Polis.

Larson pointed to a bill he saw as giving parents more choice in how they educate their children, another stated priority of the Republican caucus this session. This was Senate Bill 22-197 to codify “School Innovation Zones” which are governed by an agency separate from a school board. According to Chalkbeat, the bill would protect the existence of semi-autonomous schools in Denver that fall outside the jurisdiction of the Denver Public Schools Board and institute a dispute resolution process.

Although it is led by three Democrats from Denver – the senses. James Coleman and Chris Hansen, and Rep. Jennifer Bacon — SB-197 passed the House Wednesday night with more Republican votes than Democratic votes, Larson pointed out.

“Thanks to Republican votes,” he said, “the children of Denver will see their schools, their high-performing schools, continue to operate successfully with a high degree of autonomy.”