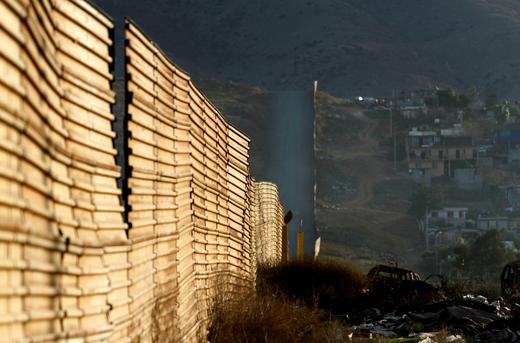 The governors of SD, ND, Neb. and Iowa ask to meet with the president. Biden on “the failure of border policy”

The border fence between the United States and Mexico can be seen in this photo taken from the Mexican side of the border in Tijuana …. January 29, 2018 4:10 p.m. EST. Reuters photo.

They say they are urging him to change his â€œfailed border policyâ€.

Noem says the border issues “extend beyond every state and require immediate action.”

Read the press releases from Governor Noem and Governor Reynold and the letter to the President. Biden, below.

PIERRE, SD – Today Governor Kristi Noem and 25 other Republican governors wrote to President Biden, urging him to change his failed border policy. The governors have called for a meeting in the next 15 days to deal with this crisis. You can read the letter here.

â€œThe multi-month upsurge in illegal crossings triggered an international humanitarian crisis, spurred an increase in international criminal activity and opened the floodgates for human and drug traffickers, endangering public health and safety. in our States â€, wrote the governors. â€œA crisis that started on the southern border now extends beyond every state and requires immediate action before the situation escalates. “

Governor Noem had previously deployed 48 South Dakota National Guard troops to the southern border for a two-month deployment. This was in response to a request from fellow Governors Greg Abbott of Texas and Doug Ducey of Arizona. Governor Noem later announced that South Dakota would send an additional 125 members of the National Guard to the border for a 9 to 12 month deployment at the request of the federal government. This further deployment will be carried out later this year.

Governors highlighted efforts by states to fill the void left by the political mistakes of the Biden administration: â€œAs governors do what we can, our Constitution requires the president to faithfully enforce immigration laws. adopted by Congress. Not only has the federal government created a crisis, but it has left our states to face challenges that only the federal government has a duty to resolve. ”

DES MOINES – Today, Governor Kim Reynolds and 25 other governors issued a joint letter urging President Joe Biden to meet with them to discuss the crisis on the southern border of the United States. The Governors’ Letter is available here.

â€œMy primary responsibility is to protect the health and safety of the people of Iowa, and the humanitarian and national security crisis on our country’s southern border affects all 50 states,â€ Governor Reynolds said. â€œOur immigration system may be complicated and complex, but the solution to ending the border crisis is simple and straightforward. President Biden has the ability and the duty to take action to protect America, restore security, and end the crisis now. “

Border apprehensions are up nearly 500% from a year ago, totaling more than 1.3 million people, more than the population of nine U.S. states. Around 9,700 illegal apprehensions have already been convicted in criminal proceedings. Cartels and traffickers earn $ 14 million a day by illegally moving people across the border. Almost 10,500 pounds of fentanyl were seized during the year, more than the past three years combined. To put this in context, only 2 milligrams of fentanyl can be fatal, which means that this amount is enough to kill seven times the American population.

The border crisis does not stay at the border. In Iowa, law enforcement officials are seeing an increase in major drug crimes. Iowa law enforcement seized approximately 6,136 grams of fentanyl between January and June of this year, a 1,070% increase from the same time last year. Methamphetamine seizures are also on the rise, increasing 122% in the first half of this year, when officers seized 133,444 grams.

In response to that threat and the Biden administration’s failure to act, earlier this year Governors Ducey and Abbott asked for help. Governor Reynolds responded by sending 28 law enforcement officers from the Iowa Department of Public Safety to assist the Texas Department of Public Safety with four key mission tasks, including traffic tasks, humanitarian efforts, tactical operations and human trafficking operations.

The Biden administration also failed to provide advance notice and transparency in their movement of unaccompanied migrant children in states. In April, the Biden administration kept Iowa in the dark and initially denied any involvement in a flight carrying 19 unaccompanied migrant girls from the border to Des Moines International Airport in the middle of the night. It was only after an ongoing investigation that nearly a month later, the Refugee Resettlement Office of the Department of Health and Social Services finally acknowledged their involvement.

“While governors do what we can, our Constitution requires the President to faithfully enforce immigration laws passed by Congress,” Governor Reynolds said in the letter. â€œNot only has the federal government created a crisis, but it has left our states to face challenges that the federal government has a duty to resolve. “