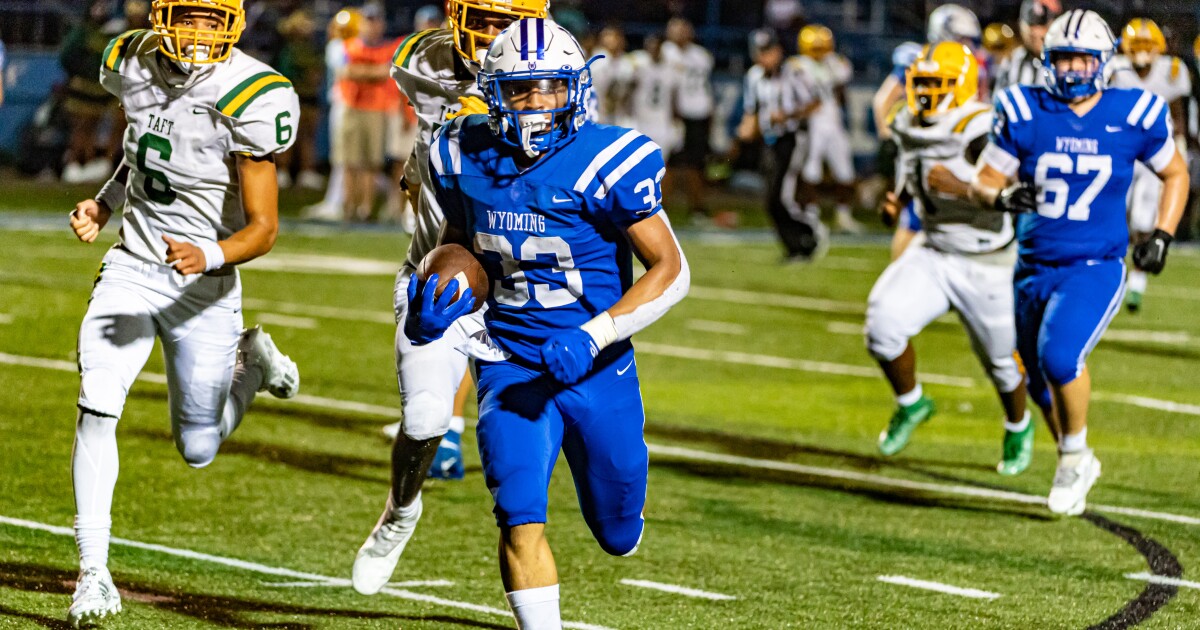 WYOMING, Ohio – Wyoming junior full-back CJ Hester isn’t shy about enjoying a Kit Kat and a blue Gatorade in the locker room about 30 minutes before every game this season.

â€œIt’s funny because he’s a Kit Kat and a Gatorade – you wouldn’t expect that on match day,â€ Hester said with a smile before practice on Tuesday afternoon.

“CJ is a great kid,” Wyoming coach Aaron Hancock said. “A great young man. He’s got his head on his shoulders, a lot of physical attributes that come off the charts. But the passion and desire to be the best he can be is second to none.”

Hester, who is listed at 5-foot, 11, and 185 pounds, showed his versatility on the court last week when he scored all of the Cowboys’ points in a 30-0 win over rival Indian Hill.

Hester had three rushing touchdowns, converted three two-run conversions and scored on a 25-yard fumble for the Cowboys, who shut out Indian Hill for the first time since 2001.

â€œHe has a passion for football,â€ Hancock said. “Just a competitor in all phases. Wants to be the best at whatever he does. I think it can kind of transcend into your program. Kids see it and want to be a part of it and really want to be part of it. improve themselves in the same direction.

Besides Hester’s main duties in the backfield, he also returns kicks and punts and plays it safe. He’s had 30 or more runs in three games this season and can see up to 40 reps on offense and up to 50 on defense.

“He’s leading us,” Wyoming offensive coordinator Keith Jordan said. “He’s a kid who wants the ball in his hands whenever he can. He never asks out.”

Wyoming running back coach DeShawn Wynn, a former Reading High School star who won a national title at the University of Florida before his NFL career, is deeply impressed with Hester’s work ethic.

â€œThroughout each week, he comes every day ready to train and ready to improve,â€ said Wynn. “Very easy to coach. Just a tough nosed kid. He’s all over the pitch.”

Hester said he has learned to be a leader as a captain this season. He might not be the most vocal player at all times, but his goals are consistent.

â€œFor the team, to be the best version of myself,â€ Hester said. â€œPush everyone. Make sure everyone is cool. Make sure everyone’s grades are good. My goal is basically to be myself. Don’t force you to be someone. other. Focus on me, focus on the team. “

Hester learned some of these leadership qualities as a freshman when he played with current University of Cincinnati quarterback Evan Prater, who graduated from Wyoming High School in 2020.

Hester still talks to the former Ohio winner Mr. Football and appreciates what Prater brought to the program while Hester watched as a high school student, then freshman.

Hester, who was a Division IV all-state first-team selection and the Southwest District’s second-year offensive player of the year in 2020, stays in the moment with a vision of success.

Hester said expectations in Wyoming never waver, and it’s something he doesn’t take lightly, whether at home or on the road. Wyoming has won 51 straight regular season games – the highest score in Ohio for this team category.

â€œThe tradition is amazing,â€ Hester said. â€œBeing a cowboy is very important. We really embrace it. We love the terrain. We protect the terrain. We do everything for each of us.â€